Farm Week: Working as a Ranch Hand in the Mid West, Garry Best Whilst carrying out some research around December in preparation for a presentation to Lagan Group UFU last month, I decided to include a mention of my ranching days in the USA back in 1976.

My father Don Best was involved with a group of breeders in the early 1970’s, importing the first ever consignments of pedigree Charolais and Simmental cattle from Europe into Northern Ireland.  He subsequently set up a partnership with an English breeder from Cheshire to buy “unborn” Simmental calves around Ireland for export to the USA, as Northern Ireland had “disease free” status and Ireland was one of the few countries where USA could import pedigree Simmental calves, which back then would sell in the US for around $2,500 each (heifers).

I have recollections of many buying trips around Ireland, usually leaving Poyntzpass around 4am or 5am depending on whether our destination was Cork or Donegal, usually arranging the furthest away breeder first and then stopping off at several locations on the return leg.

We were inspecting pregnant Simmental females and making agreements to acquire the calves (sight unseen) which would be flown out mostly to Texas to the Rio Vista Ranch near San Antonio.  Albert West III would arrange auctions of these calves on the Ranch and they became “a craze” for a few years.  They were attracting, at this stage, business investors who saw the future potential of Simmental cattle in the USA as a great investment (mostly as they were seen as a dual-purpose animal with both beef and milk attributes) that would thrive well in some of the mid-western states.

Both my father and brother John attended some of these auctions which apparently were very much the showbiz American razzmatazz affairs.

The benefit to me were the connections made with buyers and people they met, so that my “year out” between School and University became a seven month/three ranch trip utilising the various contacts.

In February 1976 I started off at the Rio Vista ranch in Texas, moving to the International Simmental Ranch on the edge of Kansas City.  Missouri in March and in July travelled by Greyhound Bus to the Peterson Ranch at Winifred Montana, quite close to the Canadian border.

The work was varied, but the most enjoyable was the four months near Kansas City as every day was spent on horseback, checking stock over the two farms or bringing in females for AI.  The accommodation was a flimsy trailer home, shared with two other ranch hands and fortunately one was close to my own age (Leo), which resulted in a lifelong friendship.  One of the more bizarre memories on a really wet day was Gordon, the Ranch Manager carrying out a Caesarean Section on a Simmental cow out in the field, taking the view that she did not need the vet.  The calf survived but the mother’s stressed condition with no anaesthetic had to be put out of her misery.

This was one of a number of signals to myself and Leo that the days of the International Simmental Ranch were numbered.  Originally funded by Wall Street Investors when Simmental were “the next big thing”, the appeal had lost its gloss and the market was dropping.  Funding for the operational aspect of the Ranch was also reducing significantly and by the middle of June, I realised I needed to make a call to Garde Peterson in Montana and move north.  He was very receptive and said the timing was good as harvesting was imminent.

Next was a scenic Greyhound bus journey from Kansas City, west to Denver and north through Colorado and Wyoming, arriving one and a half days later at Billings Montana.  I was met by the Ranch owner and driven an hour to Winifred to his 37,000 acre Ranch.  Of the 37,000 acres, 4,000 were arable, but only one crop every second year, so 2,000 acres harvested each year while the other 2,000 acres lay fallow.

The other 33,000 acres supported a suckler herd of around 1,200 cows and followers and back then, they were using Simmental bulls as the primary sire.

My work there involved driving a truck used for carrying chopped straw and some weeks the less glamorous job of reclaiming shrub land with an old Cockshuitt tractor and rake for raking sage brush out on the northern edge of the Ranch, a nine mile drive each morning in a ranch pickup.  The first day I was shown that side of the Ranch, I was still trying to understand how large 37,000 acres was in distance terms.  Garde explained that his Ranch was roughly 10 miles long by 6 miles wide.

The opportunity for horseback action was limited to only four or five days during the two and a half months I was there, but the weekly highlight was accompanying the other Ranch hands to the weekly Sunday Rodeos which was a regular for them, even though the furthest was around a five-hour drive.  Whilst I had attended a large arena rodeo in San Antonio in Texas, these were rural in comparison, but the audience either sat on the top rail of a rustic arena or looked thru the rails.  It was very much “up close viewing” and because of that more entertaining then the San Antonio show.  Most weeks there were local cowboys competing in their local rodeos, as well as the touring professionals “on the circuit”.  The latter category constantly seeking qualification for The Calgary Stampede which sparked a certain curiosity in me.  It took me 42 years to actually satisfy that curiosity and I eventually arrived in Calgary in July past to visit what they market as “The Greatest Outdoor Show in the World”.

Too large, too commercial for me.  I much preferred the top rail of a rustic corral with the action just below my boots. 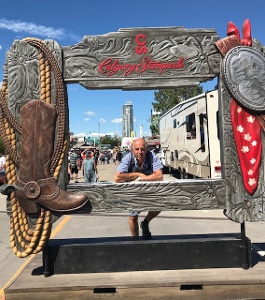