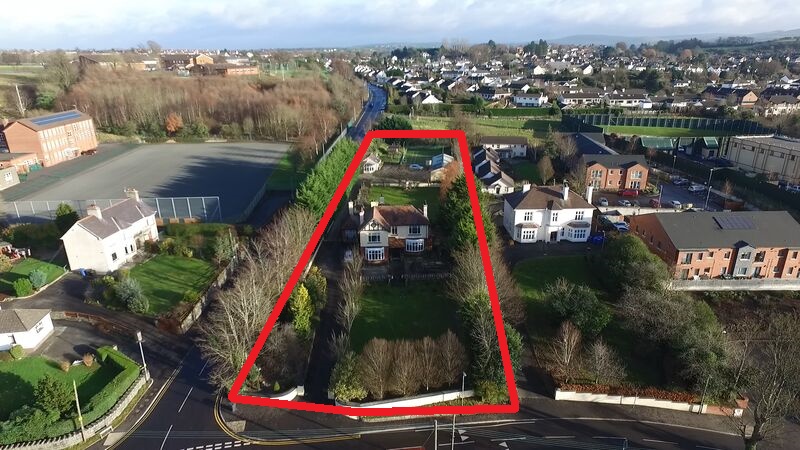 Last month I reflected on the changing land price and how the business of land and property sales has evolved over the last four decades. Over the next few columns I’m going to dig into the archives examining interesting changes during the 1980s, 1990s and 2000s.

I’m coming up to a special anniversary. Forty years ago this month, I marked the end of my first year learning the trade of Auctioneering, Valuation and Loss assessing at  Best Property Services homeplace on Trevor Hill, Newry.

With so much changed during that time frame, I went back to the archives to glance over some of the properties changing hands four decades ago.

In those days £80,000 was considered - at least by me anyway - a massive price for any residential property.

The archive carries details of the sale of a substantial ‘Gentleman’s Residence’ in Ashgrove titled Glencar, set on a one acre site. In 1983 it changed hands between two doctors for £80,000 – one an elderly retiring Doctor and the buyer a young Paediatrician in Daisy Hill.

Three years later, we sold the same property to a businessman in the meat industry – again the price was £80,000.

Five years later, Glencar was on the market again as the businessman was moving south.

Over a space of eight years, Glencar had not appreciated in value.  But why?

The reason: all three transactions had taken place during The Troubles and three doors down from Glencar was Newry’s Ardmore Police Station.  Each time we offered it for sale there were always concerns from would-be purchasers about the proximity of the police station and could Glencar potentially be a target.

It changed hands for the final time by Auction in 2017 with Planning Consent for 14 homes and was demolished five months ago, the final resident managing to benefit from the entire appreciation since 1983 by a multiplier of eight.

By comparison, a smaller holding of some 27 acres with farmhouse in the Townland of Tullyhappy, changed hands in 1980 at around £75,000 (£2,700/acre - demonstrating how the more affordable price range and proximity to Newry attracted more buyers and yielded a higher per acre price.

We had offered Tamnaharry for sale in lots (40 acres of land), while the main residence on approximately 17 acres inside the Bridge Road and Derryleckagh Road, sold for just under £90,000 to a Newry inventor and businessman.

The rare occurrence of a Public Auction of land in September 1980 took place, when 80 acres including a farmhouse, was sold at £125,000, two days after the advertised auction at Ardaragh, Newry for the Executors of the late John Malcolmson and was acquired by a purchaser of the same surname.

From the sale book evidence, it seems apparent that there were some locals ‘standing down’ to allow a relative to acquire the farm following some lengthy negotiation.  This custom in rural areas was often observed as I was to discover in the years ahead, although negotiations often lasted longer than two days.

Two notable Newry landmark properties changed hands in the early 80’s.  One being the former site of the current Fiveways Shopping Complex sold for Rose McCann for less than £20,000 and described as ‘being well situated on the edge of the Town boundary with considerable future development potential’.

The second, on Windsor Hill, was a substantial residence then owned by a well-known local vet John Anderson, and sold to Peter McAvoy for under £50,000.  Peter was one of the founding members of Autoline Insurance which eventually outgrew Windsor Hill and built its current office further out the Rathfriland Road.

Our office base during the eighties was at 15 Trevor Hill, trading under the John Best & Son name.  During my first year learning the trade, I was experiencing a bit of everything from viewings to valuations, with loss assessing including army search claims, mostly in south Armagh, where I was visiting around one day each fortnight, depending on the level of activity of the British soldiers in Forkhill and Crossmaglen.

Usually I would wait until I had six or eight army search claims instructions to inspect before setting off, sometimes meeting the landowner and he would show me the damage to barbed wire fencing or if it was a regular client he could inform me over the phone which fields were affected and I would use the farms maps we held for existing clients and mark them, inspect, measure and prepare a schedule of loss.  These claims would be negotiated with the Loss Adjuster for the Criminal Damage Branch, either over the phone or from time to time, we would meet them in Newry or Belfast depending on the volume we had to work our way through.

The eighties were also my introduction to auctioneering - from antique furniture auctions initially, to livestock marts by the mid 80’s.  Thursday mornings varied in numbers from 100 to 250 ‘dropped calves’ in Dromore Livestock Mart, whilst Saturdays were “fat sows” at Poyntzpass sale yard.  Both were formidable learning grounds, not only for the value of the animals changing hands, but more importantly the broad cross section of individuals who frequented marts during that era.

Whilst I was ‘learning the trade’ in livestock auctioneering, it often meant on occasion I ‘got caught’ with two or three lots (of calves or pigs depending on which day of the week it was) on a good day!  One would always vow not to be so reckless the next week, but easier said than done.

The problem usually arose on a Saturday, where I had a sense of urgency to depart Poyntzpass saleyard as there was a rugby match kicking off in Banbridge or further north, within the hour.

The sow auction may have been finished, but some weeks I could have inadvertently been the temporary owner of some of those animals, until I was able to offload them to some of the regular dealers.  As the pattern became familiar, often the dealers first question to me was ‘Where is your match today?”.  Once they established how much time pressure I was under, the less they would offer me and the longer they would want to haggle the price …

Forty years ago it provided many valuable and entertaining lessons in the art of negotiation and helped to hone my auctioneering skills, but it was far from ideal preparation for one’s chosen sport!

About the Author: Garry is a Director of Best Property Services, a fourth generation family business which has evolved over 130 years, to provide a comprehensive range of expertise across a full range of property services.